Once upon a time, long long ago, three little children set off for a walk. They got lost and the night fell. Tired and hungry, they came across a nice enough looking man who invited them home, promising them food and a warm bed. The man was a butcher, not such a nice one after all… ‘Come in, come in, children!’ he said, ‘There is plenty of room and food for you here’. The children stepped in, not knowing their fate was sealed. The butcher, sadly, killed them, chopped them, salted them, and put them in a barrel.

Seven years later, Saint Nicolas was passing by the area. He knocked at the butcher’s door and asked to be hosted for the night. ‘Come in, come in, Saint Nicolas!’ he said, ‘There is plenty of room and food for you here’.

Saint Nicolas stepped in, with great calm and confidence. The butcher, kindly, brought him food. His ‘best ham’, he claimed.

Saint Nicolas, however, turned it down. ‘This ham isn’t good’, he declared.

The butcher, politely, brought him his most succulent roast.

Saint Nicolas, however, turned it down. ‘This roast isn’t cooked’, he announced.

‘I’d rather have some of that nice cured meat you prepared with such dedication, seven years ago’ …

The butcher froze. Too scared to stand up to the great man, he cowardly ran away.

Saint Nicolas found the barrel in the next room. He raised three fingers, and the three children came back to life. ‘I had the best sleep ever’ announced the first one. ‘Me too’ said the second one. And the third child added, sweetly: ‘it was like paradise’.

This is one of the legends told on Saint Nicolas day.

If this tale is fictitious, Saint Nicolas was, indeed, a real historical figure in the 4th century.

Saint Nicolas celebrations were inspired by Nikolaos of Myra (also known as Nikolaos of Bari or the Wonderworker). He was born in Patara, which is now part of Turkey, in 270.

The Greek Bishop of Myra had a reputation for secret gift-giving, such as putting coins in the shoes of those who left them out for him. He died on the 6th of December 343 and became, amongst others, the Saint Patron of children.

People commemorate him on the 6th of December, from the Netherlands to Germany.

In France, he has been celebrated since the Middle Ages, mostly in northern parts of the country like Alsace and Lorraine, where he is also patron of the area. One of his relics reached Lorraine in 1087, brought by Sir Albert de Varangéville on his way back from the crusades. It is now lying in the town of Saint Nicolas de Port.

As a child, I was always looking forward to Saint Nicolas day. In my mind, he was like Santa’s ally, visiting just few days before Christmas to assess the situation. And I would find out if, that year, I had made it on the ‘good list’, or not…I always made sure I had put a pair of shoes or slippers in front of the fireplace so, as per the tradition, he could leave sweets, chocolate or ginger bread.

The one I was never too happy to see, though, was his assistant, Père Fouettard (also know as Black Peter). He was rather threatening looking, wearing a black robe and carrying switches.  His role was to issue warnings to children who had misbehaved. In the past, when Saint Nicolas gave presents to nice children, he distributed lumps of coal to the naughtier ones.

The legend stretches to say that Père Fouettard is, actually, the repented butcher from the tale… You’ll find many different stories about him. I was always told he was a chimney sweep. For years, he has also been depicted as a Moor from Spain, which has recently become a cause of controversy in the Netherlands.

Above all, celebrating Saint Nicolas is an enjoyable tradition, deeply rooted in the area I come from.

Happy Saint Nicolas day to All! 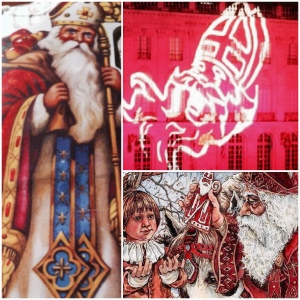