Home › About › CT is for Cretan Tale – our logo explained

CT is for Cretan Tale – our logo explained

Having studied literature and philosophy in France, and having spent some years in advertising, I developed the ability of rationalising, post-rationalising, interpreting, over-analising and over-thinking, giving a meaning to things that weren’t even particularly looking for one.

When I came up with the name ‘Continental Touch’, I started thinking of a visual representation, a logo. And I came across several pieces of art depicting the myth of Europa. To me, the link was obvious.
The myth of Europa has inspired writers, historians, painters and European politicians throughout the centuries; they gave her name to a continent and created several pieces of art picturing Zeus (in the form of a bull) and Europe.
Europa’s earliest literary reference is in the Iliad, which is commonly dated to the 8th century B.C. The earliest vase-painting securely identifiable as Europa, dates from mid-7th century B.C.
According to Greek mythology, the Phoenician maiden named ‘Europa’ was one of the many objects of affection of Olympian chief god Zeus. At first sight of Europa, the god was blown away by her striking beauty and grace. In order to avoid the anger of his jealous wife Hera, Zeus metamorphosed in a beautiful white bull. While the young maiden was gathering flowers, she saw the bull. Fascinated by him, she got onto his back. Zeus took that opportunity to abduct Europa and swim to the island of Crete. He there revealed his true identity. As a result of this encounter, Europa gave birth to three sons: Minos, who would become king of Crete, Rhadamanthus and Sarpedon.
The term ‘Europe’ was used by the ancient Greeks to define the geographical areas West and North of Greece. It is still unclear why Greeks named the continent after one of Zeus’ lovers. Although there have been various theories on the subject, I like to believe that it is somehow linked to her beauty and fertility. 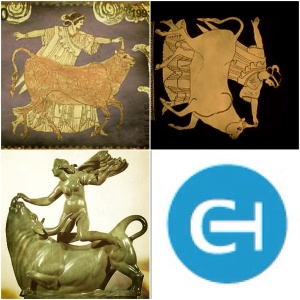 Now, I need you to use your imagination: look closely at the image accompanying this article (Europa and the Bull – Red-Figure Stamnos, Tarquinia Museum, circa 480 BC and Europa riding the bull by Carl Milles), follow the outline of Europa’s arms and the bull’s back, rotate it…et voila! The C and T of Continental Touch intertwined.
This is how a Cretan Tale inspired the Continental Touch logo.