When I was little, January was the month I dreaded the most. Christmas and New Year were gone; it was dark and cold.

The only highlight was that great-grand-aunts and neighbours were bringing me homemade doughnuts (beignets). Added to those my grandmother would make, I would pretty much eat just these for about two months. Or at least that’s how it felt like. There were so many – with slight variations – but all delicious. I couldn’t possibly let them go to waste.

This ritual would start about mid January. I never questioned why, it just happened. It was a tradition, which would mark the start of carnival period with its parades and dressing up parties.

Who knew that carnival period started with the Epiphany (Kings day on 6/01) and lasted until Mardi Gras (Fat Tuesday, just before Ash Wednesday)? So many opportunities to celebrate!

This includes La Chandeleur (Candlemas) on 2/02. This ‘event’ is right in between the winter solstice and the spring equinox; it is named after the candles Christians would bring to church to remember the presentation of Jesus at the Temple.

For me though, it always meant one thing: pancakes. (les crêpes)

Pancakes and doughnuts are amongst the most ancient festive cakes. During this time of the year, they embody the excess allowed before a period of fasting, pre-easter. They are also paving the way for the arrival of spring  – the victory of light over darkness.

In essence, it’s party time again! Until this years’ Mardi Gras on 4/03, bake doughnuts and make pancakes as often as you like.

You’ll find a plethora of recipes online but these 2 are pretty good: 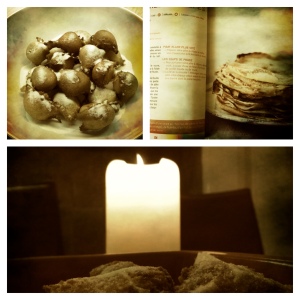